On May 8, we attended the Senate Special Committee on Aging’s "Insulin Access and Affordability: The Rising Cost of Treatment” Hearing in Washington, DC.

Maine’s Susan Collins, who chairs the Senate’s Special Committee on Aging and co-chairs the Diabetes Caucus, led the meeting. She and the other eight senators present heard testimony from four witnesses. The most notable expert was Dr. William Cefalu, the American Diabetes Association’s Chief Scientific, Medical, and Mission Officer. Dr. Cefalu highlighted the complexity of insulin pricing by walking the committee through the ways that pharmacy benefit managers (PBMs), health plans, drug companies, and other players are involved in driving out-of-pocket insulin prices to unsustainably high levels.

The senators were particularly drawn to a chart Dr. Cefalu presented, which is shown below. It details the convoluted nature of the insulin supply chain. Committee members called for transparency at each level of the supply chain so as to better understand what increases the cost of insulin and, ultimately, to lower it. 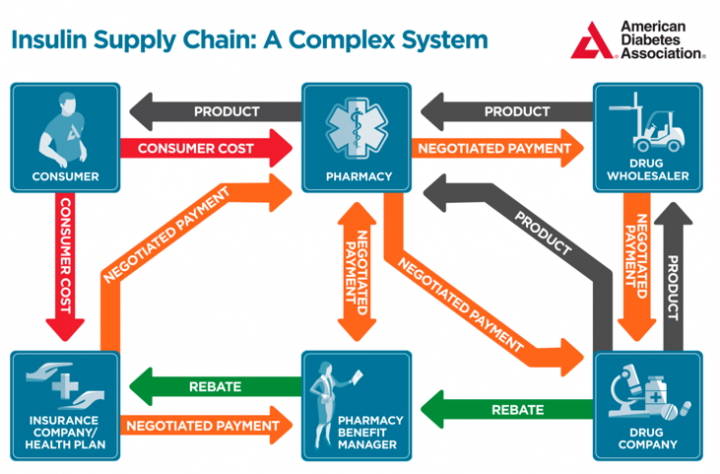 A major focus of both the senators and the witnesses was the lack of generic insulin products to reduce the price of a drug discovered nearly a century ago. Dr. Cefalu suggested investigation of the entire supply chain, not just the pharmaceutical industry, would uncover who benefits the most from these unsustainable prices. We recognize that transparency is necessary to understand how drugs are priced, and agree with the ADA’s position that the entire supply chain must be explored in seeking resolution.

Concurrent with the hearing, the ADA released a white paper describing the findings of the Insulin Access and Affordability Working Group, one part of ADA’s Make Insulin Affordable campaign. The campaign’s online petition gathered more than 334,000 signatures calling for greater transparency across the insulin supply chain and for action to ensure that all people who need insulin can afford it.

Unsustainably high insulin prices create potentially life-threatening risks for people with diabetes. The inability to afford insulin can force people to deviate from prescribed treatment, and any system that forces people to make such choices is dangerous and unacceptable. We are encouraged by the committee’s stated commitment to address this urgent issue for the diabetes community. We look forward to following the progression of drug pricing conversations in Washington.

Remember to Vote! – The Election is a Week Away